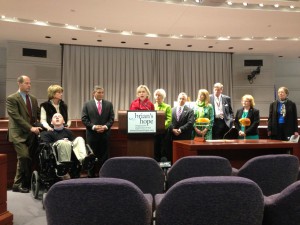 On a crisp early-March Sunday afternoon, a small bipartisan group of state lawmakers came together. Not to grab at each other’s lapels meting out compromise deals in a shadowy cloakroom, but amicably, in the soft-lit Branford living room of Brian Kelley.

One pressing issue united them, one urgent purpose: to hammer out a way to pass Senate Bill 465, which was introduced by Sen. Len Fasano, R-North Haven, at a hearing before the Public Health Committee on Feb. 27. The bill would require that all Connecticut newborns are screened for adrenoleukodystrophy, or ALD, along with the existing panel of diseases.

A rare and ruthless genetic disorder that irreversibly causes rapid degeneration of the nervous system, ALD commonly strikes boys between the ages of 4 and 8. Otherwise, it shows no discrimination with regard to race, ethnicity, or geography. Or mercy, leading as it does to death or permanent disability within 2 to 5 years of diagnosis.

Worse, “most families are unaware of the fact that they’re at risk for having a child with ALD until a child in the family is symptomatic,” said Rep. Pat Widlitz, D-Guilford. “By then, it’s simply too late.”

With the recent development of a test to detect ALD in newborns, pilot studies showing its effectiveness, and 50,000 samples validating the test, however, there is renewed hope for treatment and cure.

The test not only allows babies with ALD to be identified and then treated before they become sick, said Rep. Vin Candelora, R-North Branford; it’s also cost-effective for the state—specifically, a mere $1.50 per infant. Even allowing for the expense of administration and analysis of the test, the screening will pay for itself over time—in reduced health care, education costs and, not least, the human value of saving a child afflicted with ALD.

Consider Brian Kelley, 24, diagnosed with the genetic disorder in 1995 when he was 6. Extra costs borne by the Branford school system to educate him totaled more than $927,000. All that could have been prevented had there existed automatic testing of newborns for ALD.

That Kelley’s “courage, determination, and refusal to give up inspired his classmates and teachers,” said Rep. Lonnie Reed, D-Branford, was one reason she, along with Reps. Widlitz and Candelora, carved out time from their Sunday afternoon for the informal caucus.

Moreover, whereas most legislation has “many moving parts,” Rep. Reed said, “this one is so simple. Test these kids when they are born and they will live wonderful, healthy lives.”

All of which explains why the highly respected Kowalski Group, led by Linda Kowalski, offered to provide its legislative lobbying services pro bono. And the receptiveness to the proposal displayed by Public Health Committee co-chairs Sen. Terry Gerratana, D-New Britain, and Rep. Susan Johnson, D-Windham, at the Feb. 27 hearing.

Most compelling, though, are the words of Jean Kelley, Brian’s mother. With the newborn screening, she said, “we hope this can be Brian’s legacy — that other boys will not have to suffer the effects of the disease.”

“The sooner people let their legislators know they support the bill, the sooner it gets passed into law, the more boys can be saved,” she added, reaching over to squeeze her son’s shoulder.

In other words, there’s no time for filibustering.