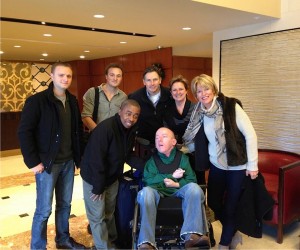 Jean and Brian recently traveled to Baltimore for the exciting inauguration of The Moser Center at The Kennedy Krieger Institute, an internationally recognized institution dedicated to improving the lives of individuals with disorders of the brain, spinal cord, and musculoskeletal system.

The Moser Center for Leukodystrophies is named in honor of the late Dr. Hugo W. Moser, one of the foremost leaders in the field of research for ALD and other similar diseases.

At The Moser Center, Jean and Brian had the pleasure of reconnecting with Dr. Ali Fatemi, the Director of the Moser Center, Francesco Odone, the brother of the late Lorenzo and son of Augusto, creator of Lorenzo’s Oil, Omouri Hassain, Lorenzo’s friend and caregiver, Patti Chapman, President of the Myelin Project and a fellow ALD mom and friend, as well as Harry and Charles Flynn from England, who are part of the British trust of The Myelin Project. The Flynn brothers appeared at the end of the film Lorenzo’s Oil at the age of 4 and 6 as real life boys taking Lorenzo’s Oil. They were saved by Odone’s lifesaving treatment.

Jean says, “It was incredibly inspiring to be surrounded by so many people who have dedicated themselves to this disease and continue to do so. We were very impressed with this state-of-the-art facility and look forward to all the advancements it is sure to make. Dr. Fatemi gave Brian special thanks for his travel and attendance, commenting how great it is for young researchers to meet him and realize the impact their work will have.”