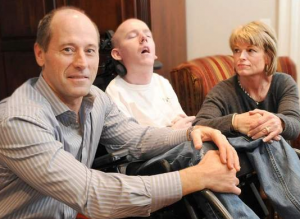 Jack Kelly, his son Brian, 24, and wife Jean at their Branford home. Brian suffers from Adrenoluekodystrophy (ALD). His parents are testifying in a public hearing at the Capitol tomorrow to try and get the screening for this disease covered by insurance. ALD is a disease that if caught early enough, many of the symptoms can be helped. Brian’s was caught at age 6, much too late. Tuesday, February 26, 2013. Photo by Peter Hvizdak / New Haven Register.

Brian Kelley, 24, was a trouble-maker at 6, according to his sister Kathleen. He loved to roller blade, ski, play sports and was very energetic, his mother Jean Kelley said.

Brian was diagnosed with ALD at 6, and is now confined to a wheelchair. Jean and John Kelley will testify Wednesday in front of the General Assembly’s Public Health Committee in Hartford asking the test for ALD be part of the other tests newborns are given with a heel stick.

“We don’t want someone else to have to suffer like you, right Brian?” Jean said while rubbing her son’s knee.

Brian can’t respond. He can hear everything, but is not ambulatory and cannot speak.

He can move his lips to say goodbye to guests when prompted by his mother. He can flutter his eyes open briefly when the dog barks.

Brian would likely be able to enjoy the skiing he loved, walk his dogs, Tucker and Bentley, and play with Kathleen and his brother, Patrick, had his ADL been diagnosed.

“It’s a way to save lives. Boys are going to be missed,” Jean said from her home Tuesday. “We’re talking about lives, lives that won’t happen without the test.”

Six months after Brian was sledding and hit his head, tests were done leading to his diagnosis. He lost his mobility, speech, ability to eat and a majority of his vision.

Most boys who have the hereditary disease die within a few years after they first become symptomatic. Brian received a bone marrow transplant from Patrick, which ensured he lived from 6 to 24, his father said.

“He wouldn’t have (lived) without the transplant,” Jack said.

The Kelley’s formed “Brian’s Hope” to stop the progression of the disease. Their goals are three-fold: to raise awareness about the disease, to fundraise for research, and to ensure newborns are tested.

Adrenoleukodystrophy is when the breakdown of certain fats is disrupted. The “bad” fats build up in a person’s system. The disease often causes failure of the adrenal glands and neurological dysfunctions affecting the spinal cord and the brain.

In addition to the bone marrow transplant, a combination of other amino acids and enzymes called Lorenzo’s Oil is available that can stop the disease from allowing the symptoms and further disruption to occur.

Currently, newborns aren’t tested for the disease and the only way parents find out is when it’s too late for other cures to work, the Kelley’s said.

The bill to have newborns tested done was submitted by state Senate Deputy Minority Leader Len Fasano, R-North Haven. Fasano knew the Kelley’s before Brian was born, when he and Jack both attended Yale together.

“This is to help future lives and families deal with this debilitating disease, and it takes folks to go through these types of issues to be great advocates who have yet to go through these things, and the fact that Jean and Jack want to get involved and bring the attention to this issue, they’re doing so many things positively to help others using Brian as their cause,” Fasano said.

Fasano said the state Office of Fiscal Accountability data suggests testing is expensive, and can cost $390,000 for the first year.

Fasano said he’s skeptical about the estimated cost, but stressed the test saves lives and funds in the long run.

The Kelley’s, with the help of the school system estimates all 12 years of Brian’s public education cost $927,266.

“All of these things become municipal costs because of education factors, when you add that times the number of kids you can save by diagnosing it earlier…it becomes the obvious choice,” Fasano said.

As Jack Kelley went to pick up a researcher, who will testify today, at the train station Tuesday evening he said goodbye to his son calling him “Chis.” It’s short for his nickname, Chisbee because as a young boy Brian couldn’t pronounce the first part of Frisbee, and instead called it a “Chisbee.”

Asked if the Kelley’s think of the “what if” their son’s disease had been caught at birth, both parents say they do, almost daily.

“You cope, you learn to live with it, but you don’t stop wondering,” Jean said.

The goal, they said, is for parents to never have to wonder “what if?”